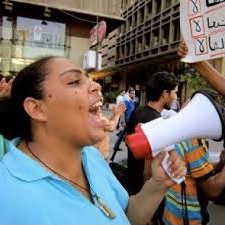 Amnesty International urged the Egyptian authorities to immediately put an end to the shameful prosecution of Rasha Azab, a journalist and writer, who is on trial on March 12 for her outspoken support for survivors of sexual violence.

Rasha Azab is on trial on charges of “insult,” defamation” and “deliberately disturbing [the plaintiff]”, in relation to Tweets in which she expressed solidarity with survivors of sexual violence who published anonymous testimonies accusing film director Islam Azazi of committing sexual assaults and used curse words to express her dismay at the impunity he enjoys. If convicted, Azab could face up to two years in prison and/or a fine of up to EGP 50,000 (US$3200).

In December 2020, the feminist blog Daftar Hekayat published six anonymous testimonies accusing film director Islam Azazi of sexual violence, including one allegation of rape.  According to women’s rights activists, survivors chose to post on this blog anonymously given their lack of trust in the judicial system.

Between December 2020 and November 2021, Rasha Azab posted several messages on her Twitter account expressing support for the women behind the allegations. On 13 January 2022, Islam Azazi submitted a complaint against Rasha Azab and film director Aida el-Kashef, who also expressed her support for the survivors on her Facebook account, accusing them of defamation. Days later, the prosecution decided to move the case against Rasha Azab to court.

It is absurd and disgraceful that the Egyptian authorities continue to prosecute survivors, witnesses and activists standing up against the scourge of sexual violence in Egypt instead of providing justice and adequate reparation to survivors.