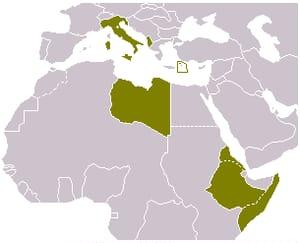 Until 1935, slavery was still in force in Ethiopia. To give an idea of the upsetting plight, when the country joined the League of Nations, in 1923, there were two million slaves out of a population of eight million. They were considered objects to be sold to the highest bidder. In the area that at the time was considered the most backward in the world, the most horrifying human tragedies took place: mothers separated forcibly from their children and sold, and husbands taken from their families. The end of slavery in Ethiopia took place with the Italian occupation in 1935.

In 1935, the Italian army, led by General De Bono came from Eritrea and crossed the Ethiopian borders. Within seven months, they conquered Ethiopia. In the meantime, the general issued the first law for the abolition of slavery: the date was 14 October, 1935. De Bono was later replaced by Pietro Badoglio to continue military operations in the Horn of Africa. In 1936, Italian General Badoglio also issued a notice to abolish slavery in the newly liberated lands. The text of the notice read: “People of Tigray, Amhara, and Goggiam: Hear ye! Slavery is a remnant of ancient barbarism and where the Italian flag flies, there can be no slavery. Therefore, in Tigray, Amhara, and Goggiam wherever the Italian flag is present, slavery is suppressed. I have banned the buying and selling of slaves. Slaves that are in your territories are free. Those who need help, report to the Italian authorities and you shall receive help and protection. Anyone who contravenes the provisions of the notice will be punished according to the law.”

The notice was later read at the Chamber of Deputies during the discussions of the draft law on the estimated expenditures for the colonies that took place from 1 July 1936 till 30 June 1937.

De Bono’s important edict had actually already been anticipated years earlier with the abolition of slavery in Somalia. In December 1923, when Cesare Maria de Vecchi (the first Governor of Somalia) arrived in Somalia, slavery was being practiced in many areas of the country. Even there,Italians put a stop to the brutal exploitation of human beings. This is evidence that Italian politics and policies have never had anything to do with oppressive practices and slavery.