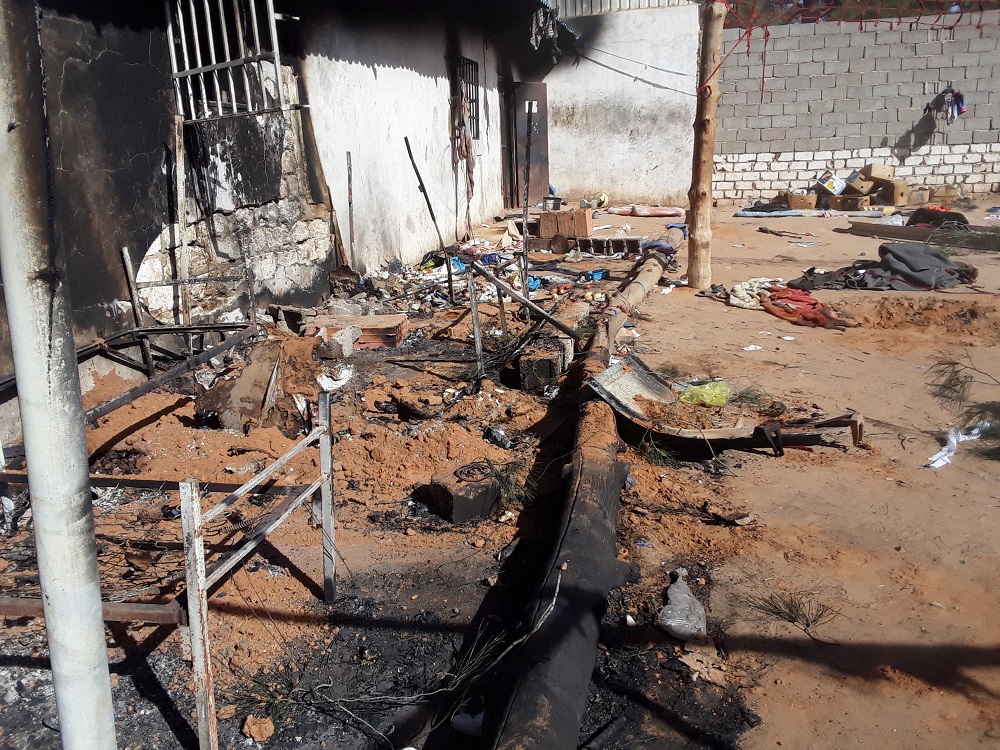 A 26-year-old Eritrean man died tragically in a fire that broke out in the detention center in Dhar El-Jebel, south of Tripoli, during the night of Saturday 29 February and Sunday 1 March. The man was engulfed in flames as he was sleeping in an over-crowded cell in the detention center in the Nafusa Mountains where over 500 refugees and migrants are arbitrarily detained.

Médecins Sans Frontières (MSF) staff, that have been providing humanitarian assistance since May 2019 to people stranded in this remote detention center, are supporting the survivors with psychological assistance and distribution of basic necessities to replace objects lost in the fire. The fire destroyed a building in which 50 people were crammed together, and a second building was damaged. A similar incident tied to the dire living conditions occurred in December, with no casualties.

“Our psychologist reports a very high level of desperation. People are in shock, numb by the repeated trauma with no end in sight. The fire and the resulting tragic death of a young man are adding up to a cycle of dreadful abuse and traumatic events that our patients have faced in Libya.”

“They tell us they feel helpless and isolated after months and often years stranded in detention. Their only hope is to see their asylum requests processed – they must get out,” said Christine Nivet, MSF project coordinator in the Nafusa Mountains.

Currently, most people who are arbitrarily detained in Dhar El-Jebel detention center are Eritrean and Somali asylum seekers registered with UNHCR. They fled their countries of origin in search of safety and asylum and cannot go back. They have been through horrific experiences during their journey, especially in Libya. Some were kidnapped by human traffickers to extort money from their families. Others attempted to cross the Mediterranean to reach safety in Europe and were brought back by the Libyan Coast Guard, supported by the EU, and then taken to detention centers, mainly in Tripoli.

After fighting broke out between militias in the capital in August 2018, many of them were transferred from detention centers in Tripoli to centers in the Nafusa Mountains, further away from the frontline, but remote and isolated, in desperate conditions and with virtually no assistance. MSF staff who first visited Dhar El-Jebel detention center in May 2019 found a catastrophic medical situation. As a tuberculosis outbreak had been raging for months, at least 22 migrants and refugees died from tuberculosis and other diseases between September 2018 and May 2019 in the area.

At least 2,000 migrants and refugees in Libya are still indefinitely locked up without any due legal process in squalid detention centers, where they remain exposed to harmful conditions and abuses. The mechanism for evacuating refugees from Libya is currently extremely limited, mostly due to the overall lack of places provided by safe countries.

Despite the severe escalation of the conflict in Libya, the European Union support to the Libyan coast guard continues unabated in order to intercept people fleeing by sea and return them to a country at war where they face well-known and life-threatening violence.

“People in search of safety find themselves increasingly stuck in Libya. Some of our patients in Dhar El-Jebel detention center have been detained for three years,” said Nivet. “What we can do as medics to alleviate their suffering is very limited as our patients remain in the same protracted harmful situation, with their international protection needs unanswered. Evacuations and resettlements of refugees and asylum seekers from Libya must be immediately scaled up.”

MSF calls for the end of arbitrary detention of migrants and refugees in Libya. Protection mechanisms including shelters for the most vulnerable where they can be assured of security and assistance must be set up as a matter of urgency, while their evacuation can be organized. This can only work if Europe stops sending back those who escape by sea and if safe countries provide more places to welcome survivors.