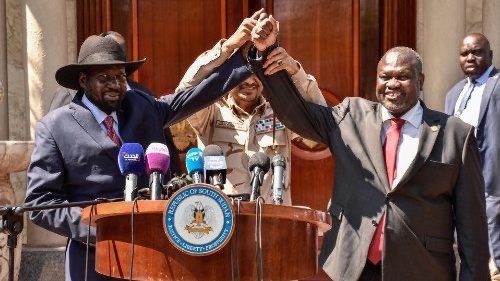 “Peace is here in Juba”, South Sudan President Salva Kiir announced today during the swearing in of four vice presidents of the new government provided for in the peace deal signed in 2018 to end six years of conflict.

According to reports by the UN Mission in South Sudan (UNMISS), the swearing-in ceremony opened with a prayer in which Pope Francis kissing the feet of the two South Sudanese leaders was recalled: the President and the leader of the opposition Riek Machar:

“Now is the moment to kiss the feet of our brothers and sisters. Kiss them, even if they are dirty.”

A local official told The Middle East Eye how President Kiir’s decision to return to the subdivision of the country to ten states and three administrative areas from the 32 decided upon after independence in 2011, was the step that led to the new government.

“We believe that this brave step and decision by President Salva Kiir will pave the way for peace and stability in the country. We hope the other parties, especially the opposition, will be serious in the constructive engagement for the implementation of the agreement,” he said.

Kiir and Machar will form a new government six years after the conflict triggered by the removal of Machar as vice president in 2013 and the accusations against him of orchestrating a coup d’état. In 2015, the two leaders had reached an initial peace deal that included Machar returning as vice president but it collapsed when fighting began in the capital again in July 2016. A new deal was signed in Sudan in 2017 then revived in September 2018 in Addis Ababa.

“I forgave the first vice president and asked for his forgiveness,” Kiir said today. “And I ask all the South Sudanese to forgive each other. Peace has returned to Juba, it will no longer be in Khartoum or Addis Ababa. The oath represents the official end of the war and we can now declare a new beginning in South Sudan. Peace has returned to stay.”

The new vice president Machar added, “I want to assure you that we will work together to end the suffering. I reiterate my commitment to work closely with President Kiir to respect the agreement in letter and spirit.”

As large as France, South Sudan only has 300 kilometers of roads, and 90% of its population doesn’t have access to water and electricity.

It is estimated that 60% of the South Sudanese population depend on food aid provided by World Food Programme (WFP) airdrops.

Hopes that the country can recover and continue on its path towards development and democracy is more tangible. But we must not abandon South Sudan.