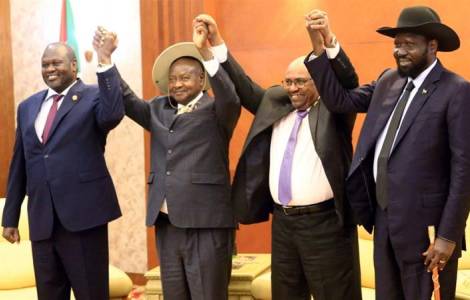 When conflicting parties in South Sudan signed the agreement on February 14 in Rome, it marked an important step for the country.

The South Sudan Opposition Movement Alliance (SSOMA) decided to enter and take part in the verification and monitoring mechanism of the ceasefire following the declaration signed in Rome on January 12. An evolution that will have a significant impact on the country.

The announcement was made by Mauro Garofalo, Head of International Relations for the Community of Sant’Egidio, during a press conference.

The aim is to end the violence of the civil war that broke out in 2013 and has caused hundreds of thousands of deaths and displaced persons.

“The added value today,” stated Garofalo, “is to have broadened the framework of the opposition forces that are now ready to negotiate with the government to implement the commitments taken in January as well as the peace deal signed in 2018 between President Salva Kiir and the leader of the rebel forces, Riek Machar”.

In addition to factions loyal to former Vice President Machar, all the political forces of the opposition adhered to the agreement including the South Sudan Opposition Movements Alliance, a coalition of various groups.

After many delays, the establishment of a coalition government that includes members of the present government and supporters of Machar, a result of the declaration, has been set for February 22.

“The fact that the opposition forces are ready to negotiate, will be of great significance [for the future government], concluded the chairperson of the talks.

International observers from IGAD, the United Nations and the European Union also attended the meeting held on February 14.