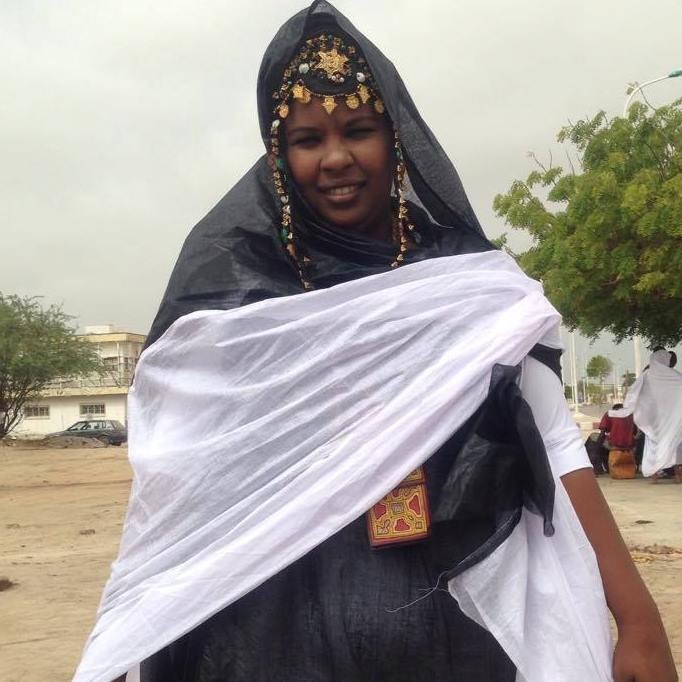 There is little known about Mauritania, kept in the dark voluntarily because of power and national corruption. Five times bigger than Italy with a population equal to Rome, the country is 100% Muslim and rich in natural resources but 45% of the black population is living in hunger and slavery. That’s right, slavery. It is passed down at birth from mother to child, making them an object not a person, often for their entire life. A slave can be sold, lent out or given away. They will never have identification documents, will be the first to wake up and the last to go to sleep in the master’s house, who has all rights over him or her. Often, slaves are the natural born children of the master who can abuse his slave whenever he wants and rape her without thinking twice about it. Slaves are told that if they dare rebel against their master’s wills, they commit a capital crime so they will not be going to heaven in the afterlife.

Mariem is an outspoken activist who denounces the realities in her country and has led a peaceful and fearless battle together with the activists of the Initiative for the Resurgence of the Abolitionist Movement (IRA-Mauritania) led by the Biram dah Abeid of which I have been a member for about ten years.

Until yesterday, Mariem had been a hostage of the government, the same power that has been persecuting the IRA-Mauritania Movement for over ten years for defending and liberating the victims of slavery. The current government doesn’t want to change its dictatorial policies. It could have done so during the presidential elections held last June when the former President of the Islamic Republic of Mauritania, Mohamed Abdel Aziz, stepped down after two terms leaving his seat to his deputy, a former general like himself, Ghazouani, who fixed the elections and proclaimed himself the winner while our friend and IRA President Biram dah Abied took second place, just barely winning the elections for the second time.

The Mauritania of today wants a black president and Biram has all the prerequisites to step up to the role. In fact, if the electoral fraud in June 2019 were to be reviewed, we would discover that the president elected by the Mauritian people was him, a man of peace, a passionate lawyer and a long-time advocate for the freedom of his people who, for the most part, follow and admire him in the hopes of one day seeing him in the Presidential Palace where the new dictator, Mohamed Ahmed Ould Ghazouani, now resides.

The movement’s policies to abolish slavery in Mauritania have never changed, not even in the darkest moments like the past few days when one of its representatives and founders, Mariem Cheick, was detained for the second time by corrupt prosecutors; puppets of a racist and xenophobic government that has no desire to improve things in the country.

What did this woman, the mother of a two-year old child, do to deserve being arrested outside her home and then detained for eight days in an unknown facility?

The only crime Mariem could have committed, like in 2015, was to protest with the peaceful Movement that for over ten years has been asking the government to respect the law of equality of all citizens without discriminating against the colour of one’s skin or the language they speak. A law that has already been passed and is actually in force in Mauritania. The Movement has grown exponentially and quickly at the same pace as its President and many other activists, crossing the geographical confines of Africa and the world. Today, it has members of every nationality, religion and colour and has been recognised internationally as the first effective Mauritian anti-slavery movement.

The courage of those who have been real slaves and have lived through the indignations of slavery that others have only read in history books. A practice that has not ended and still today, in 2020, condemns entire populations in Sub-Saharan Africa. A practice that in Mauritania sets restrictions on the majority of its population by forcefully separating them into tribal sub-group to prevent their union from leading to the change that is duly necessary in light of the demands for it.

All the merit goes to our Movement. It has liberated hundreds of people from their masters, breaking the chains of mentality first and giving freedom after. It has accomplished all this without means nor protection in the country but only thanks to the readiness and leadership of Biram dah Abeid and activists like Mariem Cheick who have guided a revolution of mentality with words and facts, bestowing people with strength and dignity and reaching the last of the last.

Mariem and many others in Mauritania are ready to risk their freedom and even their lives. This is why the current government fears the IRA anti-slavery activists and has started detainment and unjustifiable harassment again.

However, Mariem spent last night at home with her son and family, proud and determined to continue the peaceful battle. We are all happy to see her free to talk and write about the rights and freedoms of the Haratin people and all those whose rights are still being  denied in Mauritania.

Freedom is woman and women will contribute to changing the future. Fortunately, they already are.

Most of us on this side of the free world who are sensitive to the cause of freedom hope we will soon, and without too much damage, see Rule of Law in this country. Mauritania also knows how to be incredibly welcoming and we go back as soon as possible for new peace and freedom initiatives and to embrace those who fight first-hand with true dedication to human rights and freedoms.