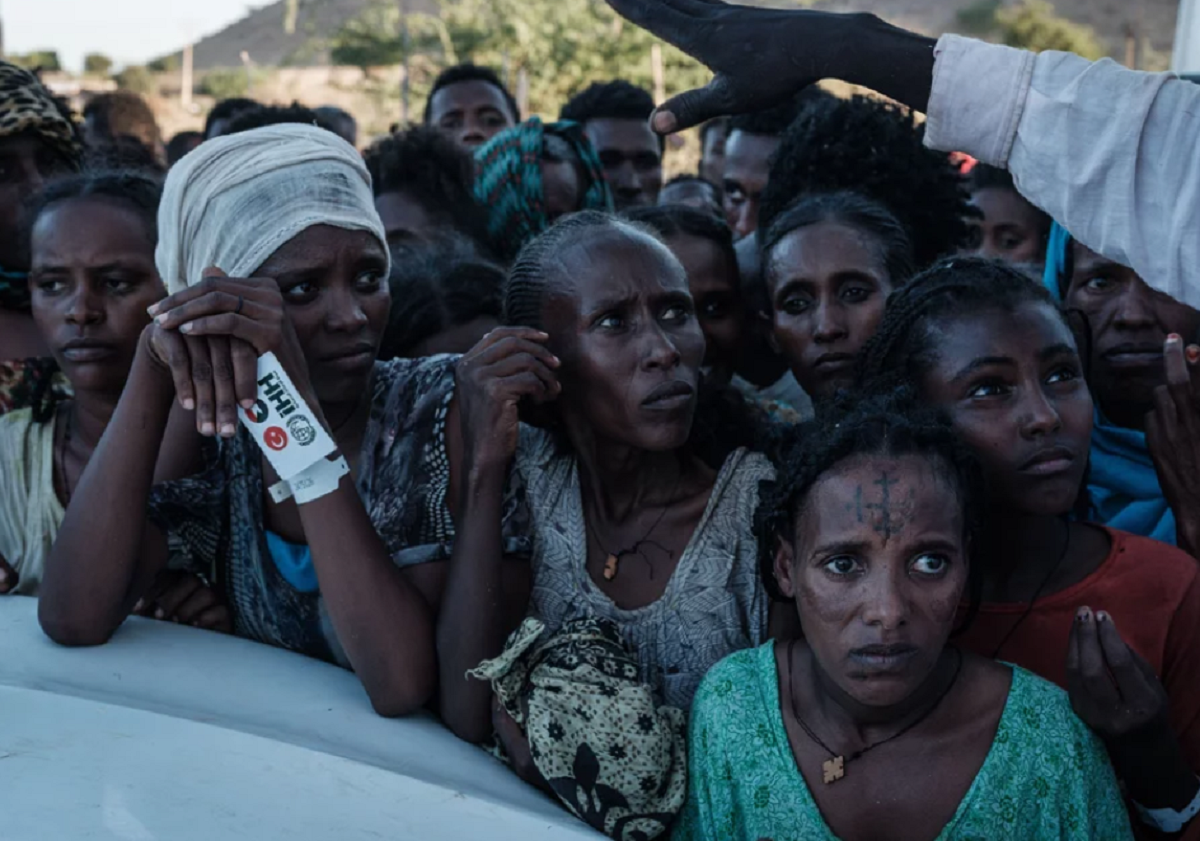 The following content is an account of our trusted contact informed of the facts and the situation in Tigray and Ethiopia who for his personal safety we will keep him anonymous, but we share his words.

NOTE: This document comes to the editorial staff of Focus On Africa while the hypothesis of a last offensive (mentioned in the report) in the form of an air raid against the TPLF / TDF Tigray Defense Forces, which is concentrating in Afar and Amhara, has become real. Fulvio Beltrami writes about the dynamics of war strategy in an in-depth analysis.

For months now Tigray region of Ethiopia is under all-supply blockade. No fuel, no bank, no telecomunication, no humanitarian aid nor cash is allowed to go to Tigray state in Northern Ethiopia. The blockade is by Eritrean, Ethiopian governments, Amhara and Afar special forces and militias. Even when few trucks and one flight allowed but through extraordinary and tiresome clearance, checking and delaying tactics by the Ethiopian authorities. Therefore, the government of Ethiopia wants to appear as if it wants to send aid but the TPLF might indirectly eat from those supplied food or use medicine to treat its civil or wounded members. This systematic deprivation of Tigray people from all basic necessities has gone on for months now. In a region with huge number of internally displaced people, shortage of everything, lack of cash and transport, lack of medicine, worries and trauma, every single day of delay of aid is intentionally creating conditions to make the civilian population to die of famine – by Ethiopian and Eritrean governments. The Abiy government wants the blame on the TPLF for aid not going in while Tigray government/TPLF makes statement after statement calling up on international community to pressure Eritrean and Ethiopian government to allow aid to Tigray and save lives. Tigray calls for international community to play its role to protect the civilians.

All said and done, now reports are coming that the number of children dying of lack of food, people with chronic diseases, lactating and pregnant mothers during delivery are dying to lack of food and everything. The Tigray Media house, and most of non-Ethiopian global medias are now awash with starvation reports. This weaponization of hunger by Eritrean and Ethiopian governments is now not a question anymore, it seems.  The government of Tigray has made several calls to international community for humanitarian assistant to the people of Tigray before shameful deaths of starvation goes full circle. The UN high officials are expelled by Ethiopian government and this has been discussed in UN Security Council on 6th/10/2021 where Ethiopia alleged the expelled staff for siding with Tigray forces in contravention with UN code of conduct. To this allegation, the UN Secretary General, Mr. Antonio Guterres requested any official information from Ethiopian government. Mr. Antonio asserted that he asked Aby Ahmed, the Prime Minister of Ethiopia if there is any problem from UN offices or staff, at two occasions before ejection of the seven UN officials. There is no official report from Ethiopian side made to the UN about any misconduct.

This intentional blockading of aid to Tigray by Ethiopian government is being understood as a character indicating dishonesty and unfaithfulness to the UN humanitarian principles, on the part of Ethiopian government.  This, is viewed by many observers that it is to starve and weaken Tigray as a whole before yet another large-scale invasion and offensive in collaboration of Eritrea. Thus, Tigray people and some other observers read the intentionality as preparatory phase of large attack.

However, the cost of this politicization of humanitarian aid seems to be so huge that another genocide by starvation might be offing unless the global community takes responsibility. Now, due to previous problems of locust invasions in Tigray followed by destructive war which destroyed all livelihoods, health facilities, depleted personal and government resources, deaths have started due to starvation. Once, the society is so weak to the extent of some members such as children and women start dying due to famine, the number of deaths grow in number. Community collectively gets so weak to help its members.

The Tigrayans I talked to, shared with me that the Ethiopian government will never ever willingly allow the passage of humanitarian aid to Tigray. It is the international community who should play its responsibility to protect when such scenarios happen. Tigray government made several appeals to the world to increase their pressure for humanitarian supply to save lives in Tigray. He told me that, he knows that people in Tigray have started eating leaves and roots that were not usually eaten, saying he watched testimonies of families in Inderta woreda.

What next to save lives in Tigray?

This was my question to another Tigrayan lady. She told me that she doesn’t expect any positive and timely intervention from African Union (AU). According to her, Tigray people have long given up on AU. She thinks whatever efforts AU is doing it is to appear as if it is trying to be seen as if it is making genuine effort. She also talked of the renewed huge preparation from Ethiopia and Eritrea because they couldn’t wipe out TPLF throughout the year. Now, they might revenge on Tigray people if they get any chance to get into Tigray. In fact, she said the starvation is not only to deprive Tigray Defense Force from food supply through the people, but to starve Tigray for not supporting the government when the government was in Mekelle.

Now, in Tigray there is systematic genocide going on by depriving humanitarian assistance to people, communication, access to banking services, electricity, and also misrepresentation by Ethiopian government about the problems of Tigray civilians. Both denial and blockade have cruel intention, Tigrayans seem to believe. In addition to wasting so many people to death by starvation, which the world should have helped avoid, the future possibility for peace is unlikely. Many Tigrayans have lost any trust in AU. UN also doesn’t seem to be able to protect the civilians, according to my informants. As we speak, deaths of people in Tigray villages and districts such as Kola Tembien, Ofla and Indera are dying, local residents gave testimonies on Tigray TV. UN has also warned but, nothing serious is happening to stop famine caused deaths of so many civilians. Overall, it is hard to explain, in modern day, the death of so many children and women, the sick and the elderly in Tigray are left to perish just by blockage by Ethiopian and Eritrean government. This shows that as global community, we are not yet governed by shared principles of HUMANITY. What can other people in other parts of the world see and learn?

Finally, like Rwandan genocide took place under the watch of the world, the Tigray condition, which Tigrayans believe is an ‘integrated systematic genocide by Ethiopian, Eritrean and Amhara forces’, history is repeating itself because we did not learn from it and put right mechanisms in place to stop such conditions from happening in the name of sovereignty! Where is the responsibility of the world to protect lives? Is it acceptable to allow sycophants to finish their people by all means and go free? Should nations have sovereignty when ethnic or religious groups are profiled and condemned to death through weird means such as man-made famine? In the first months of the war the Ethiopian, Eritrean and Amhara forces weaponized sex to dehumanize Tigrayans, now famine to emaciate and destroy the community, according to many Tigrayan people. Therefore, the world must interfere since there is no more sovereignty of the nation without sovereignty and dignity of the people in it. It is human beings and people who should have sovereignty?