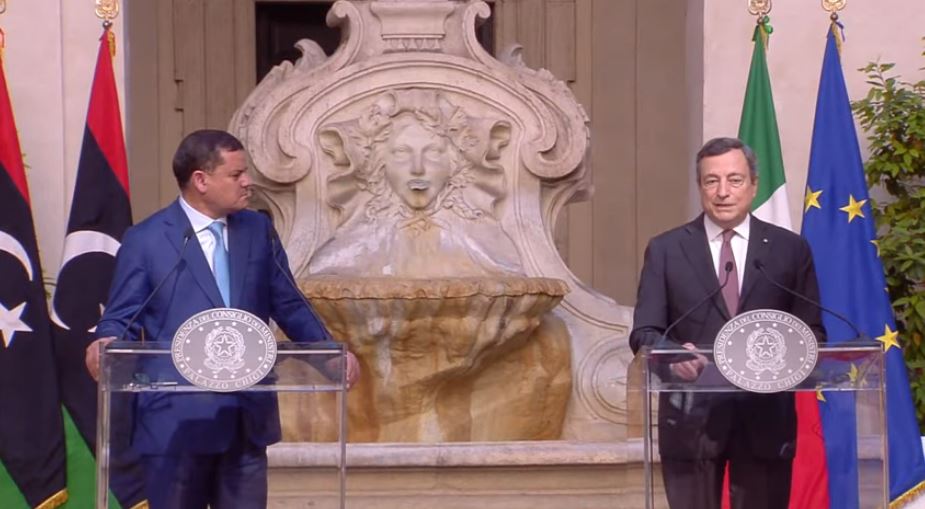 A few days ago, Libyan Prime Minister Abdul Hamid Dbeibah arrived in Rome on his first official visit since he took office.

Dbeibah was accompanied by other Libyan Ministers including the Minister of Foreign Affairs as well as the Ministers of the Interior, Transportation and Economy and Trade. The Business Forum held at the Ministry of Foreign Affairs in Rome was attended by many Italian representatives. In addition to Foreign Minister Luigi Di Maio, a large representation of Italian companies participated including  Snam, Saipem, Terna, Ansaldo Energia, Fincantieri, PSC Group, Italtel, Leonardo, WeBuild, Gruppo Ospedaliero San Donato, Cnh Industrial, and Eni. Many important commercial interests were on the table: the reactivation of some Italian macro-investments in Libya, like building the Highway of Peace which had been negotiated in the agreements signed by Berlusconi and Gheddafi in 2008, and the renewable energies dossier.

Conditions for signing business agreements with the new Libya remain the same: Libya must pursue the stabilization process that began in mid-March with the formation of the provisional Government of National Unity that will govern until the elections set for December 24.

Thus began the enthusiastic statements by representatives of the Italian government on the stabilization process in Libya and the strategic importance of a new and united Libya. Italy’s commercial and economic passion is clearly reciprocated by new Libya’s head of state Dbeibah who repeatedly said that Italy was Libya’s best partner. Apparently, a long-lasting business love affair has been triggered. An economic love affair which was reaffirmed later in the face-to-face meeting between Dbeibah and Italian Prime Minister, Mario Draghi.

The new Libya may be united, but in reality there still remain internal divisions, foreign mercenaries, Russian and Turkish military forces, and the powerful presence of Haftar who still hopes to carve out an important role for himself in the new Libya.

Although recognition should be given to the Italian government for its efforts to establish a European strategy to regulate migratory flows, it is also undeniable that, first and foremost, it is imperative to break the unhealthy association between the need for Libya to guarantee security in order to rebuild its economic recovery and Italy and Europe’s duty to stop illegal migratory flows across the Mediterranean. This old partnership cannot be broken based exclusively on an economic agreement that sacrifices the safety of weaker human beings in the name of which Italy disregards migrants and Libya strengthens its economy and institutions.

What is truly necessary is a larger strategy, because protecting the waters and boarders isn’t enough. It is necessary to have the courage to develop a broader, more global approach that includes human rights, and the legal and economic strengthening of Libya.

Yet Italy and Europe still seem to leave human rights outside the front door that regulates business diplomacy.