The 6 sisters arbitrarily arrested in Addis Ababa on November 30th were released.

The Sisters of the Congregation of San Vincenzo were arrested a month and a half ago in the Ethiopian capital because of Tigrinya origin. An ethnic group that has been tormented for over a year and a people caught in the middle of a war that is not its own: a war of power and politics, but closely linked and based on ethnicity.

An escalation of mass arrests of Ethiopians of Tigrinya origin was seen a few months ago: to date there is no news about their conditions, places of detention, many of these undeclared.

The Ethiopian Premier in a recent speech documented by video recording, during the celebration of the homecoming to the Ethiopian diaspora (The Great Ethiopian Homecoming #GreatEthiopianHomecoming), said:

“Because if we hadn’t released prisoners, you [diaspora] would have been considered unfortunate. At the very least, the AU summit would be canceled.

Having come to your country and bringing good luck, the AU Summit will now take place in two weeks. “

The Premier continues talking about perception on the basis of the release of some former TPLF politicians released as a signal of “reconciliation” adding:

“The main reason for the decision to physically have [the summit] carried out here is because there is now a perception that Ethiopia is not as bad as they say; that thousands of Ethiopians from the diaspora are peacefully on vacation; prisoners are released; and that it is a country that has hope.

This is why the AU Summit will take place. But it wasn’t an easy task. “

One wonders, however , when the 2 deacons arrested with the aforementioned nuns, the 2 Sisters in Kobo arrested on New Year’s Eve 2020, and many other men and women of the church, like the thousands of Tigers of all walks of life, sex and age (yes, even children) will be released like the politicians TPLF and Oromo.

The state of national emergency launched and launched in November 2021 by the central government will last for 6 months , so it could hopefully end in April of this year: at the same time the amnesty for all those thousands of Ethiopians of Tigrinya origin arrested in arbitrary way? It is not known.

What is certain is that several United Nations humanitarian agencies have had to stop their support and aid activities, due to the insecurity dictated by air raids and drone attacks which in recent weeks alone have caused hundreds of deaths and as many injuries among the civilians, but also for lack of life-saving and medical material, health care, food, fuel and money: ergo unable to operate in their mission to save lives.

The World Health Organization – WHO, despite the Ethiopian government’s report of “misconduct” to Director General Tedros Adhanom Ghebreyesus who declared Tigray blocked “de facto” as “hell” for all Ethiopian people Tigrinya origin crushed by political choices of ethnic repression, the WHO (WHO) will continue to demand humanitarian access and humanitarian corridors from the central government.

News that is learned in preview for Italy from the journalist of Avvenire, Paolo Lambruschi:

“Desperate appeal from the Catholic diocese of Adigrat: for a month it has suspended emergency interventions because everything is missing in the region due to the blockade of aid. The Red Cross confirms.”

We attach a copy of the letter below 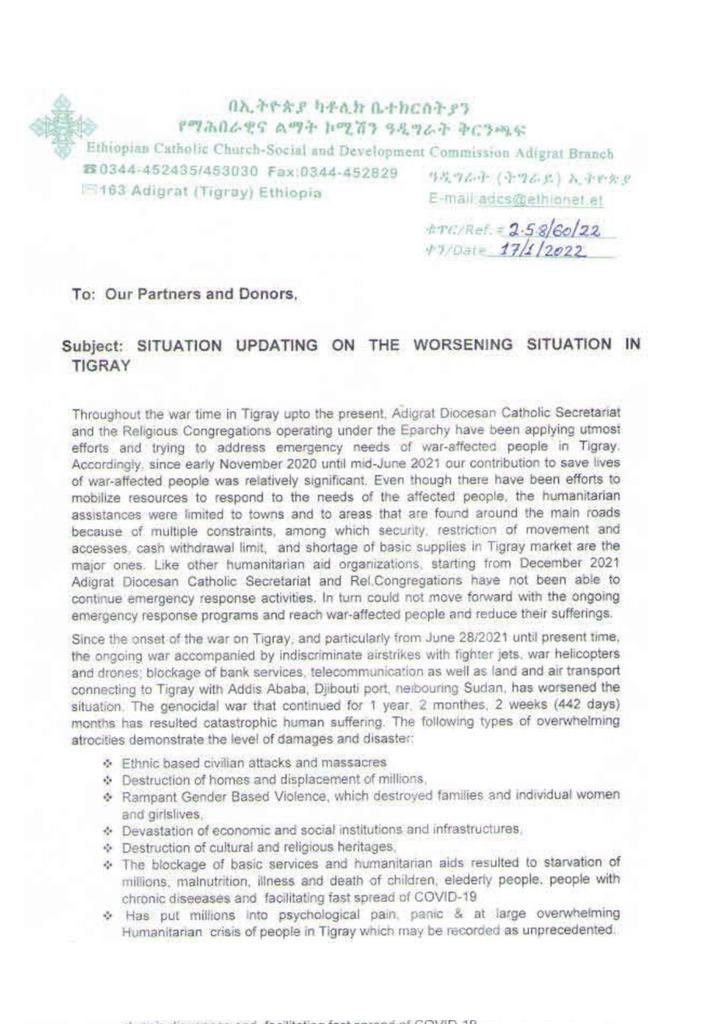 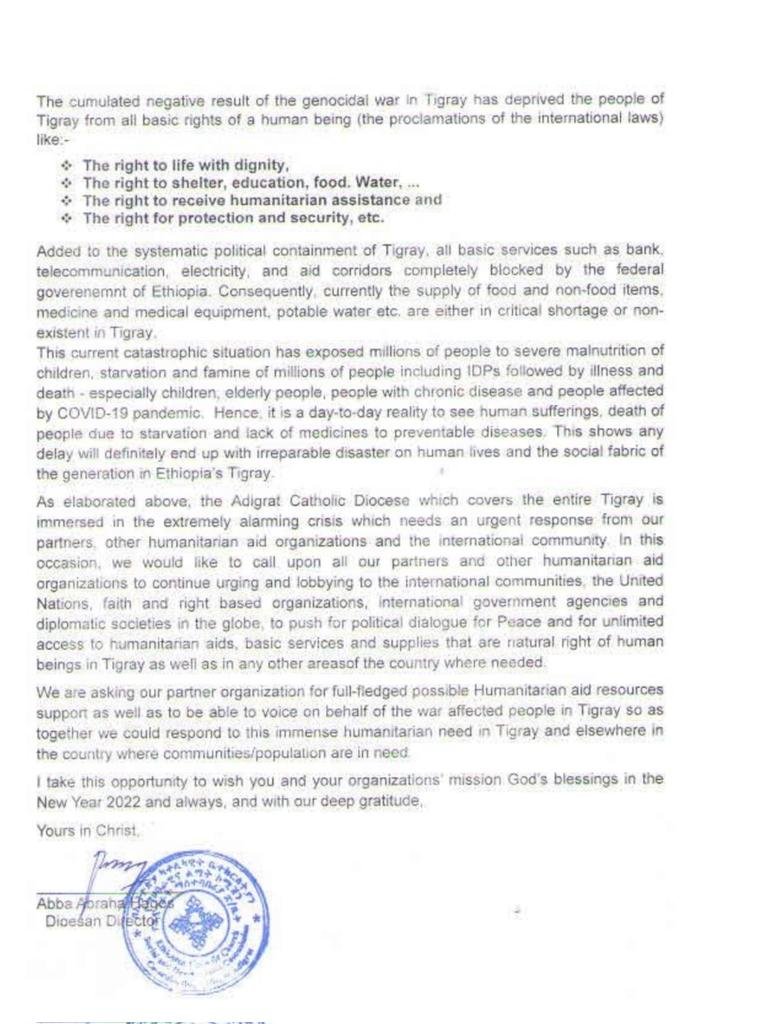 It is also certain that in the nearby regions of Amhara and Afar millions of displaced people survive as a result of the conflict: all of northern Ethiopia therefore needs assistance and support.

Here are the last steps:

On 10 April 2019 the pro tempore Minister of Defense Elisabetta Trenta signed in Addis Ababa with her counterpart the Agreement between the Government and the Government of the Federal Democratic Republic of Ethiopia on cooperation in the defense sector;

the agreement intends to provide a suitable legal framework for the launch of structured forms of bilateral cooperation between the Armed Forces of the two States; precisely, Articles 3 and 4 of the Agreement enumerate the matters of cooperation and the modalities of the same;

on 26 June 2019 the Council of Ministers approved the draft law for the ratification and execution of the military cooperation agreement then submitted to the Chamber and the Senate, the agreement was ratified with law 17 July 2020, n. 90;

the entry into force of the agreement allows the Ministry of Defense, in agreement with the Ministry of Foreign Affairs and International Cooperation, to carry out support activities in favor of the Ethiopian Government, which could involve the possible acquisition by the same of defense materials produced by the national industry -:

whether the agreement was implemented by supplying weapons to the Ethiopian army;

whether the actions of human rights violations and crimes against humanity perpetrated by the Ethiopian army and their allies in Tigray are to be openly condemned;

if we intend to give a clear political signal, suspending the validity of the agreement on cooperation in the defense sector between Italy and Ethiopia (as proposed in an article by Professor Trenta herself);

if you intend to propose an Italian mediation activity, considering the excellent relations that were a prerequisite for the stipulation of the agreement in question.

The interrogation is still ongoing, after 3 months , despite the escalation of humanitarian severity in Tigray and the rest of northern Ethiopia.

We have received confirmation from the same Deputy Piera Aiello who has solicited the request for an answer three times: to date still awaiting the Ministry of Defense (Minister Lorenzo Guerini) delegated to answer also for the Ministry of Foreign Affairs (Minister Luigi di Maio) .

Just as the war of the bureaucratic-political-diplomatic process does not seem to stop, so the life situation for every person caught in the inhumanity of the war not theirs in Ethiopia is getting worse and worse.

It is clear that in Italy but also in the rest of the world, there is an escalation on military spending. Many countries, including the tricolor boot, are focusing on the drone economy, a thriving market for those who sell (Turkey, China, Iran have supplied Ethiopia with their remote radio-controlled flying bombs) as well as for those who buy.

It is underlined in a recent article by Giorgio Beretta for the Rights Observatory that:

In the article Giorgio Beretta highlights the contrast, the contradiction that sees on the one hand Minister Lorenzo Guerini proposing an “unprecedented number of rearmament programs” in Parliament a few months ago, while on the other the appeal of a list of 50 nobel prizes who demand and propose a disarmament program as global military spending has doubled from 2000 to today, 2022.

In this world, in the one world in which we all live and which today is more and more split in half, more and more gap between the north and the south of the world, between those who have and those who have not, perhaps we need to think about a new paradigm in which resources and energies must be relocated towards the fundamental issues that drive our society forward instead of giving priority, or rather, being transported by capitalism: first of all people, the preservation of the individual and your rights.

Cover photo: Mother and son who survived an airstrike by Ethiopian government forces receive treatment at Shire Shul General Hospital (which is missing everything) in the city of Dedebit in the northern region of Tigray, Ethiopia, 8 January 2022