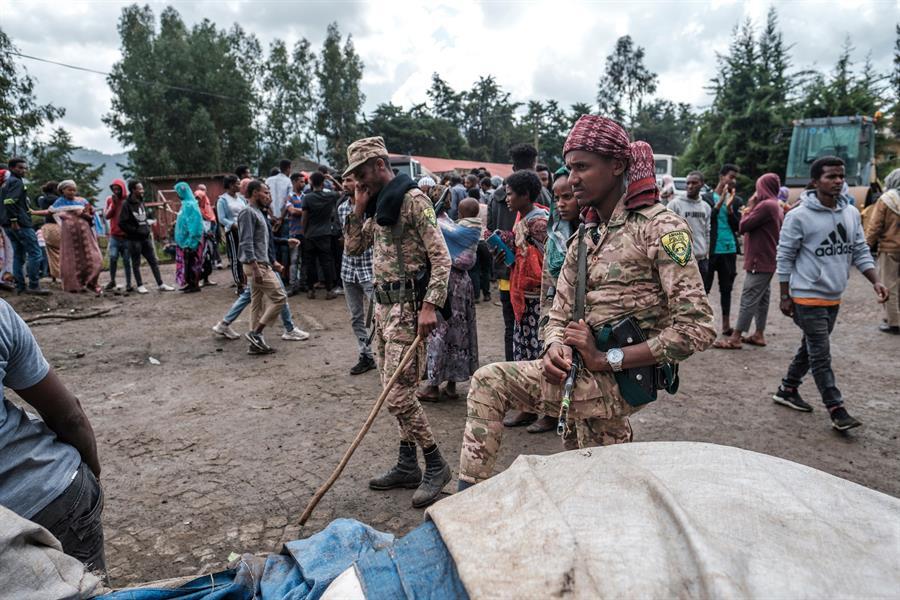 The Amhara region has become the main battleground where the fate of the ongoing civil war will be decided. At the moment, the situation has balanced out. the Amhara militia and the Ethiopian National Defense Force (ENDF) have managed to block the attacks of the Tigray Defense Forces (TDF). For the past two weeks there have been a series of attacks and counter-attacks that make the outcome of the conflict uncertain.

Abiy wants to drive out the TDF in Tigray in order to have the time necessary to reorganize the army and receive war drones from Turkey, if they will are delivered at all. The TDF wants to conquer the capital city of Bahir Dar and Gondar, an ancient imperial city. Their win would mark the defeat of the Prosperity Party forcing Prime Minister Abiy and the nationalist Amhara leaders to flee.

The offensive by the national army and the Amhara militia could lose its initial momentum due to the lack of manpower. The various appeals to enlist in order to stop the “terrorists” from Tigray have had no effect. Regardless of their political views, the majority of young Ethiopians is not keen on getting involved in the civil war. This represents a serious problem for the Addis Ababa regime. Men are needed, immediately.

To solve this problem, the President of Amhara, Agegnehu Teshager (who is also President of the regional Prosperity Party and a leading political figure in the Amhara fascist nationalist movement) launched a campaign to recruit high school, technical and vocational school and university students. Teachers have also been called on to join the fight. The call was published in the daily Ethiopian news outlet, Addis Standard, that has already been victim to a serious attempt at censorship by a state decision to suspend it a month ago. The decision was revoked following international pressure.

In a statement issued on the evening of 30 August, Teshager called on middle and high school, technical and vocational, and university students, as well as teachers and all youth who were physically fit for military service to join the fight to “bury the Tigray terrorists”. Teshager justified the appeal stating that the ongoing war in his region will determine the survival of the Amhara ethnic group, the second largest ethnic group in Ethiopia after the Oromo.

“A war of revenge and cruelty is being inflicted on the people of Amhara. It is a crucial time for us to stand together, more than ever, to bury our enemies and ensure our survival in the face of the threat to our very existence. (The TPLF) wants to erase us from the face of the earth. All the Amhara youth must do their part by joining and strengthening our defense forces and special forces and playing a supportive role. We must all become soldiers to protect our loved ones and the institution that defends us from total destruction,” he declared on TV and e radio Teshager. Obviously, by institution he means the Prosperity Party. The extreme right-wing leader of Amhara accused the Tigray army of murder, rape, looting and the destruction of public and private property.

Diplomatic sources confirm that it is not a simple invitation. Teshager ordered his special forces and militia to recruit young students and professors. Recruitment is not carried out by implementing the coercive and violent methods normally used by the Eritrean regime: abducting youths when they get out of school. A subtler tactic is being used. It relies on the duty to defend the Amhara ethnic group, creating a moral obligation of ethnic loyalty. Those who refuse are reported to the community in which they live to create blame and social exclusion making them look like “traitors”.

Until now, the use of minors has been found only in the Eritrean occupying troops fighting in Tigray. Unable to defeat the Tegaru resistance, the dictator Isaias Afwerki began to recruit young men and women between the ages of 14 and 17 forcibly. After a short period of training, he sent them to die in Tigray. Recruiting minors for units that were fighting was one of the factors that led to the victorious TPLF offensive that liberated Tigray.

Currently, many Eritrean minors are being sent to Afar to prepare for an attack against the TDF. The reciprocal accusations made so far regarding child soldiers lack real evidence to convict the Amhara militia, the ENDF, TDF and OLA of this heinous crime.

Unfortunately, the risk now is seeing Amhara minors in uniform forced to fight to defend their ethnic group.
Teshager likened the invitation (obligation) to enroll to the survival of the Amhara ethnic group, thus manipulating reality to have a greater effect. The Amhara Prosperity Party regime is not only at war with the TPLF but with a coalition of various ethnic groups from the Ormia to the Gambella whose objective is to overthrow the current regime that has led to the collapse of the entire country and has caused the massacre of hundreds of thousands of soldiers and civilians. The coalition (of which the TPLF obtained leadership being a more organized and experienced military and political force) has not shown any genocidal intentions against the Amhara. Its objective is to free the country from the nationalist regime.

Demonization of the opponent is being waged by the nationalist Amhara regime in order to undermine the possibility of sitting at the negotiations table to find a peaceful solution to this horrible conflict. On 28 August, Kenya, Niger, Tunisia and St Vincent Grenadines presented the UN Security Council with a request to intervene on the Ethiopian government to lift the designation of “terrorists” of the TPLF and OLA “to allow for direct contact and negotiation with armed actors opposing the government.” They also called on the United Nations to demand that the Ethiopian government officially announces a serious and tangible ceasefire associated with the end of the blockade on humanitarian assistance in Tigray and the willingness to sit down in peace negotiations.

Yesterday, during an interview for the program “HardTalk”, Getachew Reda (spokesperson for TPLF) told the BBC that the ceasefire will be respected when the Amhara regime permits humanitarian assistance access in addition to restoring electricity, communications, air and land transportation and banking facilities. When asked if the TPLF were ready to withdraw their troops from Amhara and Afar (as requested by the USA), Reda responded they were not claiming the defense of the Tegaru population. He also denied that his party is seeking separation from Ethiopia but confirmed that the conflict will end with the removal of the regime of AratKilo, a neighborhood in Addis Ababa where Prime Minister Abiy resides.

The accusations of atrocities and war crimes carried out by the TPLF are not supported by irrefutable evidence unlike the crimes committed by the Amhara militia FANO, Eritrean armed nationalist movement and occupation troops. Nevertheless, it would be foolish and biased to claim that the regular Tigray army and associated militia did not commit war crimes. Both sides commit crimes in every conflict. The difference lies in the quantity of crimes committed that highlight a precise plan for ethnic cleansing or genocide.

The civil war in Ethiopia entered a national phase and every party involved has every interest in turning the enemy into a monster to have the moral justification to exterminate it. since the beginning of the conflict (November 2020) the Ethiopian and Eritrean governments have used the Rwandan tactic used from 1991 to 1994 by dictator Juvenal Habyarimana’ Mouvement Révolutionnaire National pour le Développement (MRND). Carry out ethnic cleansing and crimes against humanity on a large scale and blame the other side. The goal is to put victims and executioners on the same level.

The only way to verify the reliability of the crimes attributed to the enemy are independent investigations
conducted by Ethiopian and foreign experts not politically or militarily involved. Numerous requests have been submitted to the United nations, the European Union and the United states. According to an official statement issued by the parties in conflict, the TPLF is willing to facilitate independent investigations including the bombing of civilians in Afar attributed to the TDF, whereas Abiy’s government rejects them claiming it is a “serious interference of the internal affairs of a sovereign country.”

At this stage in the conflict, the Ethiopian and international media must place a great deal of attention on how they deal with the news by placing it in the right military and political context. Unfortunately, some news outlets risk being exploited by the Afwerki and Abiy regimes reporting news that is not contextualized especially if they concern humanitarian aspects. On the other side, for the past two weeks, some western media outlets and journalists, that have been accused in the past ten months of bias and partiality for the TPLF, have minimalized and even decided not to report news on the Amhara front in order to hide the evident struggle of the Tegaru army, indirectly confirming that the charges against it were well-founded.