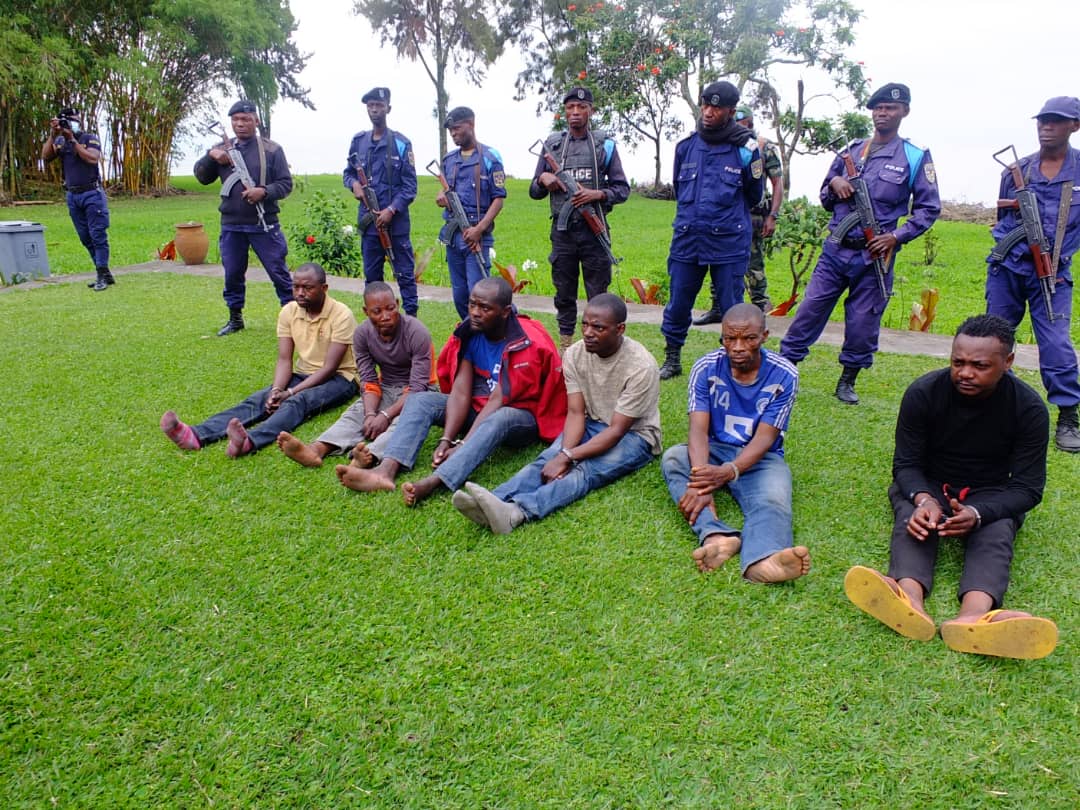 Six men handcuffed and seated on the ground were presented yesterday by General Aba Van Ang, chief of police of the province of North Kivu, in a press conference as alleged killers of Italian ambassador Luca Attanasio, Vittorio Iacovacci and his driver Mustapha Milambo. The chief of police and the military governor of the province, Lieutenant General Ndima KogbaConstant, have been described as habitual criminals belonging to three different gangs that have committed crimes in Kivu for a long time. The material perpetrator of the murders, leader of a criminal group called “Aspirant”, is a fugitive, but local police said they were certain to catch him shortly because they know his movements. According to some journalists present at the press conference, only two of those arrested are involved in the attack on our compatriots, while the others are accused of the murder of a Congolese businessman and several attacks on humanitarian workers. These men are part of a rebel group Balume Bakulu known for numerous kidnappings in the area and wanted to ask for a million dollar ransom for  italian diplomat. At a first reconstruction by the police, leader of “Aspirant” gang would have shot Ambassador Luca Attanasio and this would have brought down the plan for his kidnapping. To this press conference have not been presented evidence or even the methods and timing of the arrest, but if they are found guilty they risk the death penalty. At the moment there are only the statements of the police commander who has not explained how these arrested were identified and if there are any confessions or clear links with the murder of the Italian ambassador. Justin Kabumba, a congolese journalist, was contacted by a person who was part of the convoy who allegedly recognized one of the attackers of the World Food Programme last February, an important element in supporting the arrests. The hypothesis of kidnapping had been the one advocated by the congolese investigators from the beginning, but it did not seem the most likely one. Not because kidnappings in Kivu are rare, which happen  every day, but because there is a complete lack of an organizational network that can manage a long and complicated negotiation such as those for the release of an ambassador. The President of the Democratic Republic of Congo Felix Tshisekedi had already spoken of arrests last May, but they seemed only circumstantial sentences, while today military governor of North Kivu presented the operation with great resonance. In recent weeks, italian Ministry of Foreign Affairs had put pressure on the Congo to prevent the case from falling into oblivion and shortly afterwards the local police began a series of roundups among the criminal gangs operating in the Goma area. The self-styled leader of “Aspirant” gang is still missing, who would be the material author of the murders and who could perhaps help to understand if there are some principal. Even congolese president had spoken of a principal who would have orchestrated this criminal act. A lot of rumors of serious difficulties in the investigation had rebounded from the Kivu because there was a complete lack of funds to continue investigating, in a region where violence and killings are the order of the day. Italian judiciary at the end of January should issue the indictments of the two investigations in progress, the first one for terrorism and murder, the second one for omitted precautions against those who organized the trip of our compatriots. It is surprising this unexpected twist by the congolese police, often appeared inert towards the investigation and who seemed certain that they had found the culprits in the Hutu rebel group FDLR, but who instead turned out to be completely unrelated.