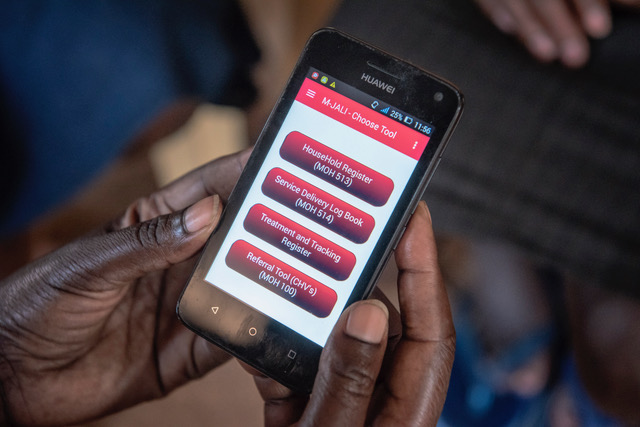 According to the alarm launched by The World Health Organization on April 17:

“The number of cases is rising. They are not as high as what we have seen in Italy, in Europe in general, and in the United States, but we must be on the alert. We must follow the developments of the curve of contagions and understand how it evolves. We must be very cautious. In perspective, it would be very difficult to contain numbers that high due to the difficulty in enforcing social distancing and the weak healthcare system. We must immediately reinforce testing laboratories and support governments in mass widespread communication. Not only to keep the numbers from rising, but because we have a duty to protect all lives,” said Gugliemo Micucci Director of  di Amref Health Africa – Italia. “We do so also by training community health workers using a mobile phone platform called Leap. In Kenya alone, it was used to train about 50,000 healthcare workers.”

The App can be used with standard cell phones and smartphones.

Mariem Sané from Senegal tells us, “Every day we reach 100 people, over 10.” According to the Amref health worker in the Kolda region, “Many people’s lives have been damaged by the COVID-19 and government measures. For example, peoples like the traditional Griot – poets and singers who keep their ancestor’s oral tradition alive – or merchants, in a developing context, who take part of ceremonies. These people don’t have an income anymore because their daily earnings depended on family ceremonies (weddings, baptisms, etc.). Imams and worshippers can’t go to Mosque, housekeepers cannot manage their small businesses, drivers have either quit their jobs or suspended their activities.

At the beginning, many of them were reluctant to accept certain government measures. However, thanks to communication and information sharing within the community, people have finally understood the reasons for the restrictions implemented by the government. But the threat is still very real.” Mariem and other healthcare workers go from market to market each morning to check if  sanitizing lotion points are empty and from house to house with information on the fight against the COVID-19.

Emmanuel, another Amref health worker, talks about the fear generated by the COVID-19 in Uganda. Emmanuel is a member of the district anti-COVID task force in the area of Arua, the region in which the Rhino Camp for South Sudanese refugees is located. He tells us what struck him the most. “The deaths of many children and pregnant women following the closure of the country due to the lack of means of transportation to get to hospitals. Hunger amongst families because many of them earn their living doing daily manual labour.  The stigma associated with people who have travelled abroad recently or have resulted positive to the COVID-19 test. Reports of families or individuals chased by the communities. Interrupting drug treatment for people with health problems like diabetes, tuberculosis, HIV, and high blood pressure. The lack of Personal Protective Equipment (PPE) for health workers on the frontlines in hospitals. These are the things that continue to pain me the most in this battle.”

“I am responsible for more than five hundred families here in Kibera.” Repha Kutai is a Community Health Worker (CHW) in one of the largest shantytowns in Africa in the capital city of Kenya, Nairobi. Her job in the time of COVID-19, in a space where social distancing is near impossible, is to dispel fake news about the virus and, case after case, support Amref’s battle for the health of the community.

To read the complete stories: http://bit.ly/Covid19_Amref