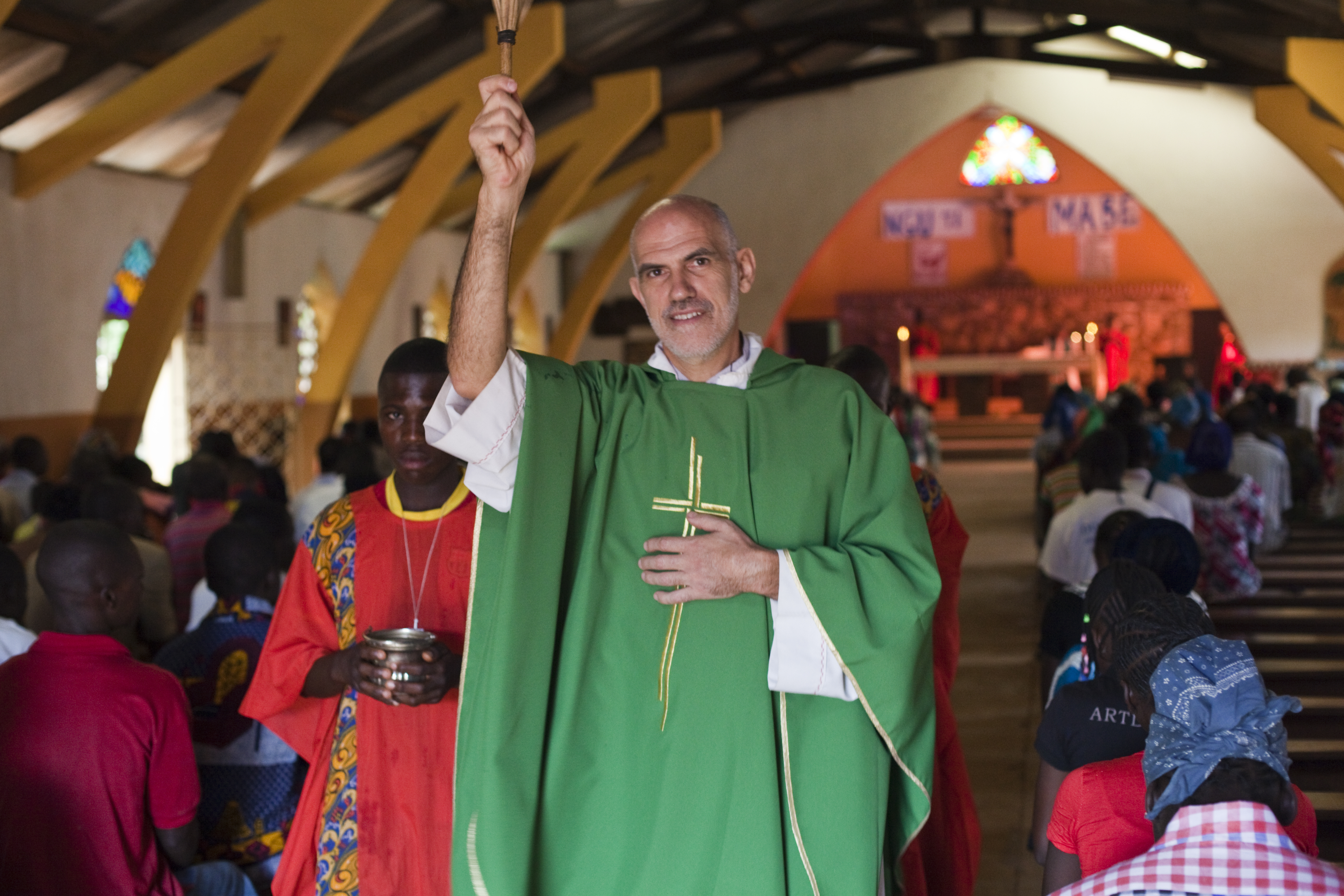 When she arrived at the pediatric center in Bangui, Fanna, nineteen years old and already a mother of three, had few expectations. Her hopes had been consumed by the struggle to feed her children. In the village where she lives with her family, 70 km from the capital city of the Central African Republic (CAR), malnutrition is a daily occurrence. Moussa, the youngest, is only eight months old. When he was recovered, he weighed only 4 kilograms, half that of a healthy 4-month-old baby.

He couldn’t eat and kept vomiting. After four days he was so exhausted he was unresponsive. So, Fanna decided to take him to hospital. She waited because she couldn’t stay away with him for a long time because there was no one at home to take care of her other children.

Moussa doesn’t complain even though the feeding tube is too big for his gaunt face. He is too weak to even cry. He looks at the people around him with his big brown aching eyes.

“I knew there was a nutrition program at the Italian hospital. My oldest daughter was brought here in the past for malnutrition. We eat once a day. There’s never enough food so my children get ill often. Since the rainy season began, it’s even worse,” says Fanna, her voice breaking with emotion. At the nutrition center in Bangui, strongly supported by Pope Francis, patients receive special food to regain appetite and responsiveness. They are given therapeutic milk that contains sugar, oil, vitamins and minerals and a high-protein peanut paste.

In addition to funding the construction of the structure, Papal funds also guarantee support for training and refresher courses for local doctors and nurses, as well as healthcare and nutrition training courses for families.

The project was launched after the Pope’s visit to Bangui in 2015 where he ended his pastoral visit in Africa and the Jubilee of Mercy began.

The church earmarked 4 million euros in donations, of which about one million from the Roman Catholic Dioceses of Novara. A further 750 thousand euros were raised through various fundraising events for CAR promoted by the Vatican Police.

The project, coordinated by the Ospedale Bambino Gesù, was launched in May 2016 and included various restructuring measures to provide dignified conditions at the Complexe Pédiatrique, a public structure, and dismantling the tents where children suffering from malnutrition were hospitalized.

In time, a generator, a current transformer and two pressure tanks were purchased to ensure sterile conditions in the operating theaters. Later, work began on a drainage system and other operations including restructuring four departments in the main block of the hospital with 193 beds, along with furnishings and equipment, the purchase of medical supplies, and the necessary drugs for treatment. In 2018, the construction of the new center with 80 beds for therapeutic nutrition for children began and integrated as part of the existing pediatric hospital.

“I do not forget!” was the video message sent by Pope Francis to CAR at the inauguration of the center that also recalled, “the suffering eyes of the many malnourished children whom I met during my brief visit to the Complexe Pédiatrique”, and the words of the doctor who accompanied him, “Most of these children will die because they have resistant malaria, and are malnourished.” The message underlined the commitment that “This must never happen again.”

The Central African Republic has the fourth highest infant mortality rate in the world and malnutrition is the main cause of death. Children in the earliest years of life are the most vulnerable: according to the United Nations Office for the Coordination of Humanitarian Affairs (OCHA), one in seven dies before the age of five.

“The current food crisis in the Central African Republic is acute. We already know that it will continue into next year. Its effects are devastating. There are children who arrive at our hospital that can’t even laugh, play or cry because they are too weak. In other words, they aren’t children anymore,” whispers Isabelle Dialle, an Italo-French doctor who has been in Bangui for only a few months.

Every year, from May to September, hundreds of thousands of people in the country and in all of Central Africa, struggle with severely restricted access to food because it is the lean season when the dry season brings about the gradual lack of access to food stocks.

“Children arrive in such critical condition that it’s often too late to save them and they die within 24 hours of hospitalization. They are the primary victims of the lack of food, poverty and bad nutrition,” continues the doctor. “In the past week, we received 30 severely malnourished children, all of them with medical complications.”

In 2019 malnutrition has escalated significantly and the dry season arrived earlier than usual, causing severely restricted access to food for over 600,00 people. A state of emergency has been declared for most of the region where prevalence of severe acute malnutrition exceeds the emergency level of 2%.

Children admitted to the nutrition assistance program are underweight compared to their height and have muscle problems. They may also present swelling of the feet, face and limbs.

The hope is that they are discharged as soon as they are able to eat without medical assistance.

When their health conditions are stable, the healthcare staff combine therapeutic treatment with a daily session of cognitive stimulation. Children who are severely malnourished may have a delay in mental and behavioral development that, if not cured, can lead to a more serious and long-lasting consequence of malnutrition. Emotional and physical stimulus through play can significantly reduce the risk of mental impairments and the irreversible effects of prolonged dietary deficiencies.

“We become aware, day after day, of the importance of play and the mother’s care during  recovery. During the stimulus sessions, mothers are encouraged to play with their children with toys and interact with their play activities. The results are moving. We watch children recover their responsiveness and, above all, they smile and play together. It is very important to involve parents and encourage emotional assistance for children,” says Francois Beauleau, a neonatologist who became a widower after he retired so he left his home in Paris and decided to volunteer his services.

Thanks to the effectiveness of the Pediatric Center, inaugurated in March by the President of the Fondazione Bambino Gesù, Mariella Enoc, infant mortality in the country, albeit slowly, is in gradual decrease.

A story of mercy and good will. Like the story of Father Aurelio Gazzera.

If the people of the Central African Republic were to rank who has done the most for their country, the names Pope Francis and Father Aurelio Gazzera would be at the top, and have been for some time. This is no surprise for those who know the Carmelite priest from Piedmont who has been a missionary in CAR for 27 years.

Deep hazelnut eyes, soft-spoken and obstinate, Father Aurelio has two great passions: God and the Central African Republic where he arrived in 1992 at the mission in Bozoum, the nerve center of his work to fight poverty and foster peace in a country scourged by long inter-ethnic conflicts.

His perseverance in the defense of civil rights for Central Africans and their country is also notable. In fact, he was arrested in May because he was caught taking photos and filming a Chinese-owned mining site.

A worker saw him as he was documenting the devastating operations threatening the mission and nearby villages. Before he was able to reach his car to get away, the militia arrived and warned him to stop. They confiscated his camera and cellphone and took him to a police station in the city. The intervention of an angry crowd of protestors convinced the state attorney to arrange for his release.

“It could have been a massacre. The militia shot at the protesters. They didn’t kill anyone by pure chance. Chinese companies are pillaging kilometers of land causing catastrophic water pollution and ruining the river. Analysis carried out on samples taken from various points revealed a high presence of mercury but no one bothered to inform the population of the risk of contact and the use of the water,” Father Aurelio accused, launching an appeal to local authorities to put a stop to the ecological disaster poisoning water sources and jeopardizing the health of the community.

His complaint did not go unheard. He alone, a simple Italian priest, was able to stop powerful multinational, million-dollar companies.

Following an investigation by a committee of the Central African Republic parliament and an inspection by Members of Parliament on mining activities in the area of Bozoum carried out by the Tian Xian, Tian Run, Meng and Mao companies, ordered the closure of four gold mining companies.

Father Aurelio has an extraordinary civic passion for justice and rights, matched only by his faith. Everyone who meets the missionary from Cuneo (Italy) is enriched by humanity and hope.

“The stories he tells about his world are as impassioned as a mother who never tires of talking about her children. His daily tasks in Bozoum include his responsibilities to the mission school, where 1,500 children go every day, and the nearby villages. He is particularly proud of the method created to teach the national language to lower elementary students,” says Sarah Numico who works with Aleteia [an online Catholic news and information website].

“The government is begging us to broaden our presence in the country,” Father Aurelio says proudly talking about his teaching program. “We also offer healthcare activities; a project on AIDS and one for pregnant mothers. We also provide assistance in agriculture and training courses in new technologies in farming and in creating retail spaces.”

The results are extraordinary, optimized during the Bozoum and Bouar fairs: “a yearly space for people from the region to sell their products and feel at peace,” he adds, smiling.

“Last year, we reached $ 90,000 in sales. The annual per capita income in the Central African Republic is $ 400. The economic rebirth has also led to the opening of a Savings Bank with 5 outlets between Bozoum and the neighboring villages.”

Despite the great amount of work father Aurelio does, he also finds the time to write. A few months ago, he published a book of short stories about his experiences and the facts he his witness to which he has written about in his daily blog since 2011.

The title of the book is Courage. It talks about life in the Central African Republic and “the beauty of missionary work”. They are words of the Carmelite priest who has dedicated more than half his life to this country.