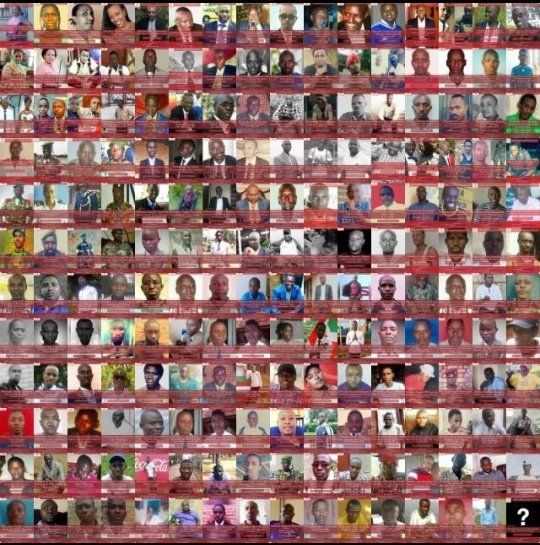 Circular no. 530/569 / CAB / 2022 issued by the Ministry of the Interior and Public Security on 24th January requires the public service, national and foreign private companies, associations, Burundian NGOs to complete an ethnic identification questionnaire for Burundian employees. A questionnaire where the ethnicity of the employee must be indicated in the “origin” column: Batwa (pygmies), Hutu, Tutsi.

The ethnic filing was decided by the Minister of the Interior: General Gervais Ndirakobuca under approbation of the Prime Minister: Marshal General Alain-Guillaume Bunyoni and the President of the Republic: General Évariste Ndayishimiye better known by his nom de guerre during the civil war (1993 – 2004): General Neva.

In the original version of the decree, General Ndirakobuca had also included foreign NGOs, UN agencies and diplomatic representations. These three categories were cancelled in the final version of the circular under African diplomats suggestion to “not create further friction with Western countries”.

Burundian citizens ethnic-based census was introduced in 2018 by the dictator Pierre Nkurunziza (who died of Covid19 in 2020) but was boycotted by all public functions and by Burundian and foreign economic and humanitarian actors. Now the ethnic census becomes mandatory. Anyone who refuses to fill out the questionnaire or provides false information is liable to criminal sanctions in the case of a Burundian citizen or expulsion from the country in the case of a citizen of foreign nationality.

The news has aroused strong international concern as the ethnic registration of the population wanted by the military junta currently in power in Burundi is an exact photocopy of the infamous ethnic census commissioned by the Rwandan dictator Juvenal Habyarimana in the 1970s. Until the liberation of Rwanda, implemented by the Rwandan Patriotic Front of Paul Kagame (current Rwandan President), ethnicity identification (Batwa, Hutu and Tutsi) was present on any identity document.

This classification served for about 24 years to permit the immediate identification of the ethnicity of Rwandan citizens in order to better impose social discrimination on citizens of Tutsi origin. On April 6, 1994, the ethnic filing was really useful  for a better and immediate identification of the Tutsis in order to kill them. During the African Shoah (which lasted 100 days), 1 million Rwandans, mostly Tutsis, were killed.

“The minister’s request came at a worse time as Gitega predicts that EU budget sanctions will soon be lifted,” a diplomatic source in Bujumbura told to Radio France International. According to European diplomatic sources contacted in Brussels, the decision taken by the military junta removes the possibility that the European Union can lift the economic sanctions imposed on the Burundian government in 2016 following the serious violations of human rights and crimes against humanity perpetuated by the racial extremist party CNDD-FDD led by the dictator Nkurunziza, of which the current President, Prime Minister and Minister of the Interior are part of it, assuming the political and ideological heritage of the late Nkurunziza.

The ethnic census and its sinister future address represent yet another illogical and self-defeating decision by the military junta illegally in power after the sham elections of 2020. With this act, the military junta highlights its desire to return to a horrible past of persecution of the Tutsi minority, as happened in neighbouring Rwanda from 1970 up to 1994.

It embarrasses the “friends” of the military junta both in Brussels and among the diplomatic representations of some Western countries and the European Union in Burundi, who will now have extremely weak arguments to convince the EU of the regime’s good will to start a democratic process and respect for human and civil rights.

Finally, the ethnic census underlines a precise, deliberate and premeditated will of the regime to continue both the policy of terror of the late dictator Nkurunziza and the Nazi ideology HutuPower. With the ethnic census the myth of a President (Évariste Ndayishimiye) with moderate political ideas and a good soul has collapsed.

Who is General Gervais Ndirakobuca, author of the ethnic census?

Born in 1970 from a poor family on the hill of Kibaya in the municipality of Bukinanyana, province of Cibitoke in northwestern Burundi, Ndirakobuca Gervais attended the faculty of science, department of chemistry at the University of Burundi, becoming a super active member of the Front for Democracy in Burundi (FRODEBU), the extremist party that promoted the HutuPower ideology by professing domination of the superior Hutu race. The ideology, created in Rwanda in 1957 and spread to Burundi much later, is directly inspired by the ideology of Nazi Germany. The current military junta and the Hutu party CNDD-FDD refer to this ideology of death that triggered the Rwandan Holocaust in 1994.

In the 1993 elections FORDEBU emerges as the first party and its leader: Ndadaye Melchior assumes the office of President on 10 July 1993. Ndadaye was the first Hutu head of state since the country’s independence. In just three months, he attempts to impose racial domination in Burundi. He was killed on 21 October 1993 by officers of the regular army during a coup organized by the armed forces who had received precise information about the preparation of a genocide against the Tutsis in Burundi. The genocide of the Tutsis had already been attempted in 1972 with the support of the Rwandan dictator Juvenal Habyarimana. An attempt that unleashed the violent repression against Hutu civilians wanted by President Michel Micombero, a General of Tutsi origin.

Ndirakobuca Gervais, after the coup d’état and the assassination of President Ndadaye, was sought by the police. He was suspected of being one of the most active university leaders in HutuPower propaganda. He miraculously manages to escape the raid carried out by the police on the Mutanga university campus aimed at eradicating the Hutu extremist cells inside the University of Burundi. A raid that turned into an indiscriminate and senseless massacre of many Hutu students carried out by the majority Tutsi police.

Ndirakobuca joins the HutuPower terrorist movement of the Forces for the Defense of Democracy – FDD led by Pierre Nkurunziza which sparked a civil war after the assassination of President Ndadaye. The FDD were the armed arm of the political formation National Council for the Defense of Democracy – CNDD – an ethnic party that came in power on 2005 thanks to the Arusha (Tanzania) peace accords of 2000.

The FDD genocidal militiamen will join in 2006 armed forces and police starting a purge of all Tutsi soldiers and officers through arrests, dismissals and extra judicial executions started in 2008 and still perpetuated against the last surviving Tutsi of the Defense Forces and the Burundian Police.

During the civil war Ndirakobuca gains the trust of leader Nkurunziza, and of Generals Bunyoni and Ndayishimiye. A close friend of the current Prime Minister Alian Guillaume Bunyoni, (former chief of the political police), he becomes one of the leading cadres of the National Police of Burundi. In the popular protests of 2015 against the third unconstitutional term of dictator Nkurunziza, he becomes one of the great architects of the horrible repression together with Marshal General Bunyoni. To date, the exact number of victims is not known, some quantifying around 15,000 civilians.

The tragic events of blood prompted the European Union to impose economic sanctions in 2016. In 2017 Ndirakobuca was decorated by the dictator Pierre Nkurunziza for “exceptional patriotic merits” in recognition of his role in the repression of democratic demonstrations and the decimation of opposition parties, independent medias and Burundian civil society.

Ndirakobuca currently belongs to the executive cadres of the military junta, endowed with enormous powers. President Ndayishimiye and Prime Minister Bunyoni have entrusted him with the delicate task of countering the internal “enemies” of the nation (Hutu opposition parties, civil society and Tutsi ethnic minority).

Ndirakobuca established a state of police and terror by forcing even foreigners residing in Burundi to undergo periodic checks of their homes to register the inhabitants and guests of each individual private residence. Controls that are carried out by the police without warning between 5 and 6 in the morning in order to catch any subversives in their sleep.

An army of spies under his command listen to every speech in bars, work worship places to immediately report any thoughts against the regime. The consequences are often tragic for people who speak against the military junta or, more simply, express doubts about governmental conduct and  politics.

Ndirakobuca maintains close contacts with the Burundian paramilitary militia Imbonerakure (author of the numerous massacres of civilians from 2015 to the present) and with the Rwandan terrorists Democratic Liberation Forces of Rwanda (FDLR) authors of the genocide in Rwanda in 1994. FDLR are the main suspects in extra-judicial execution by the Italian Ambassador to Congo: Luca Attanasio took place in Goma (east of the country) on February 22, 2021

On 22 September 2020, the European Union included Ndirakobuca in the list of political and military figures in Burundi subject to restrictive measures and ad personam sanctions due to the crimes against humanity committed by him between 2015 and 2016.

Ndirakobuca Gervais to the national and international media presents himself as a fervent Christian, a good family man devoted to his wife and 7 children (3 boys and 4 girls). 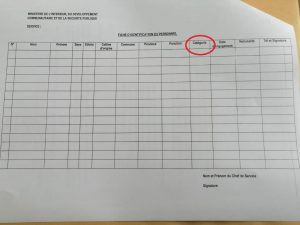 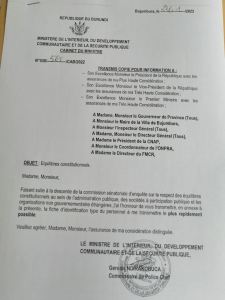