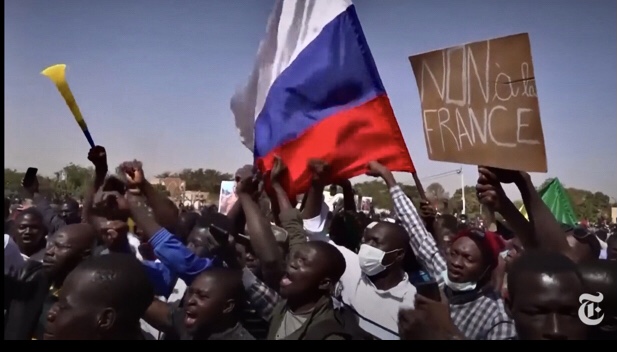 After the coup d’etat of Lieutenant Colonel Paul-Henri SandaogoDamiba, the streets of capital of Burkina Faso were filled with people who took to the streets to celebrate the takeover of the military who ousted President Roch Marc Christian Kaborè. This kind of situation isn’t entirely unusual even in Guinea, a few months ago, the population sided with the military who had removed the old president / dictator Alpha Condè, but this time the hand behind seems clear. In fact, together with flags of Burkina Faso, the crowd waved russian flags and shouted slogans against the old colonial power of France. How the flags of the Russian Federation came from it is not known, why russianembassy in Ougadougou closed in silence, but the long russianhand in West Africa is now a certainty. The New York Times reported that one of the latest acts of burkinabe President Kaborèwas the refusal of Colonel Damiba to hire the russian contractors of the Wagner Group to fight the Islamists who are rampant in the country. This refusal would have triggered the coup d’etat despite Kaborè’s attempt to try to reach the french embassy to seek protection, an attempt blocked by gunshots against the presidential car. Former president was in fact very close to Paris politics and under French pressure he refused that the russians